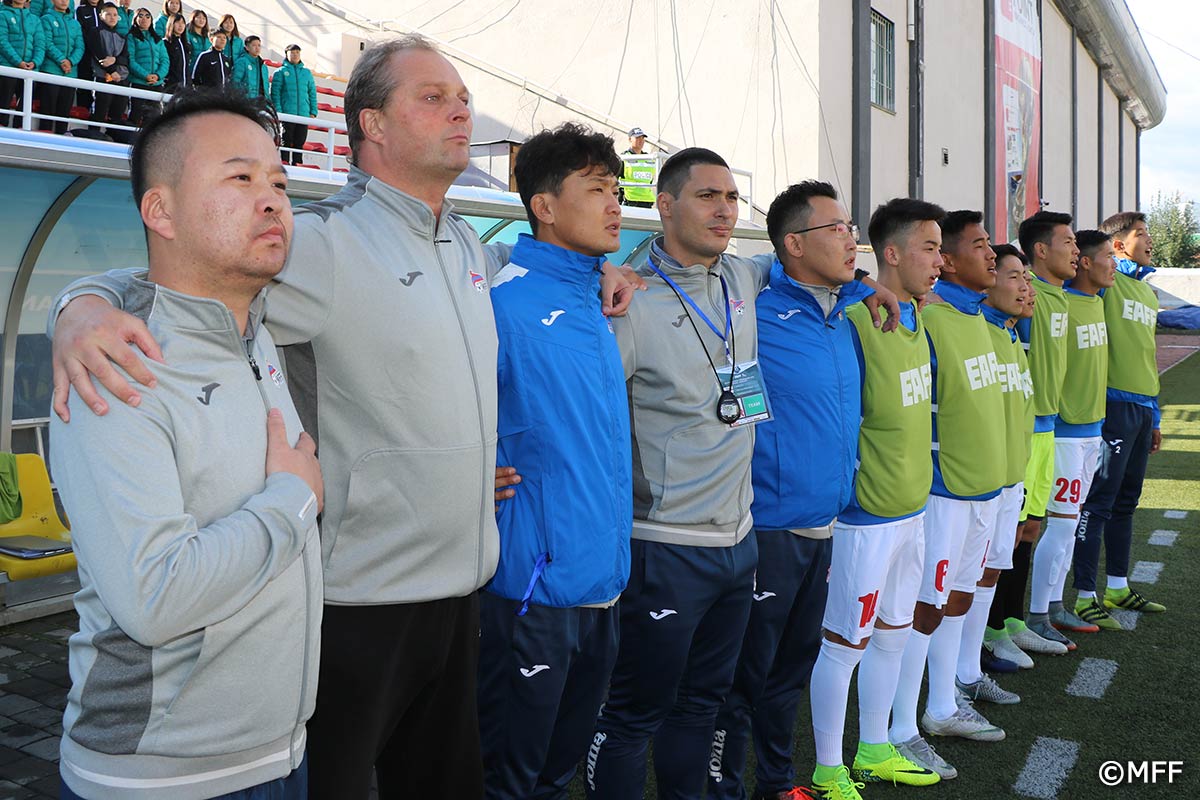 The second match of the opening day of the EAFF E-1 Football Championship saw the Mongolian home team hosting Macau at MFF Stadium. And though the visitors showed great organization across the field, it was Mongolia who controlled the game with the support of their very vocal home fans.

Despite the supremacy showed on the pitch, Mongolia could not find an early goal. In particular, BAYASGALAN Garidmagnai had three corner-kick opportunities to open the account for the home side.

The Mongolians’ efforts finally were rewarded in the 40th minute, when MUNKH-ERDENE Tuguldur unleashed a sharp shot from the left. HO Man Kai put a patch on it, but SEO-OD-YANJIV Gankhuyag was quick to dart in and tap the ball for Mongolia’s opener.

The second goal for the home side came on the siren at the end of the first half. In the 45th minute, JANCHIV Sundorj’s direct free-kick had pace and was well placed, giving HO no chance to prevent Mongolia from taking a 2-0 lead at half-time.

However, the game reopened only three minutes into the second half. On an indirect free kick, GOIS FERNANDES Carlos Leonel was quick to track the ball and slam it into the goal from close range.

All was in balance until the 74th minute, when substitute BATBOLD Baljinnyam scored a candidate for the goal of the tournament.--he dribbled around two Macanese opponents and unleashed a shot that HO could not prevent from finding the back of the net.

Mongolia added a fourth in the 83rd minute, when NYAM-OSOR Naranbold tapped in a ball that HO deflected right to his head. The goal sealed a superb performance for Mongolia, who showed great team spirit and some top individual skills. Macau will have to improve their game in the next two matches if they want to achieve better results.

Mongolia Manager WEIS Hans Michael:
“I think the game was from the first to the last minute a one-way street, and we conceded on the only chance Macau had. However, we reacted well to that. Had it happened last year, we might have conceded a second goal.

“It was the best game Mongolia played under my coaching, and it is showed by a very clear result. We played a lot around in the last year, and you can see how the team has piled up experience and has improved.

“The crowd giving support of course helped, all went well, I hope they show up in numbers again for the next two games, particularly for the one against Guam on Thursday, that can be the highlight of this tournament for us”.


Macau Manager IONG Cho Leng:
“I want to congratulate with the Mongolian team for winning the game. Of course, this is not the result we wanted, but this is football. Wanting something is not enough to get it. The team that performed better, won.

“The weather was very cold for us Macanese, but at least it was no raining. More than that, we are not used to artificial pitches, so maybe that made it a bit harder for us.

“We prepared to come here and play tournament, not only one game. So in the next two matches, all my boys will play to win. This is the only thing in our mind.”


Mongolia 11. NYAM-OSOR Naranbold:
“I am very happy for my goal, this was for my team-mates and for the fans as well.”


Macau captain 11. LAM Ka Seng:
“We tried our best, but Mongolia were better, they are a good team.”