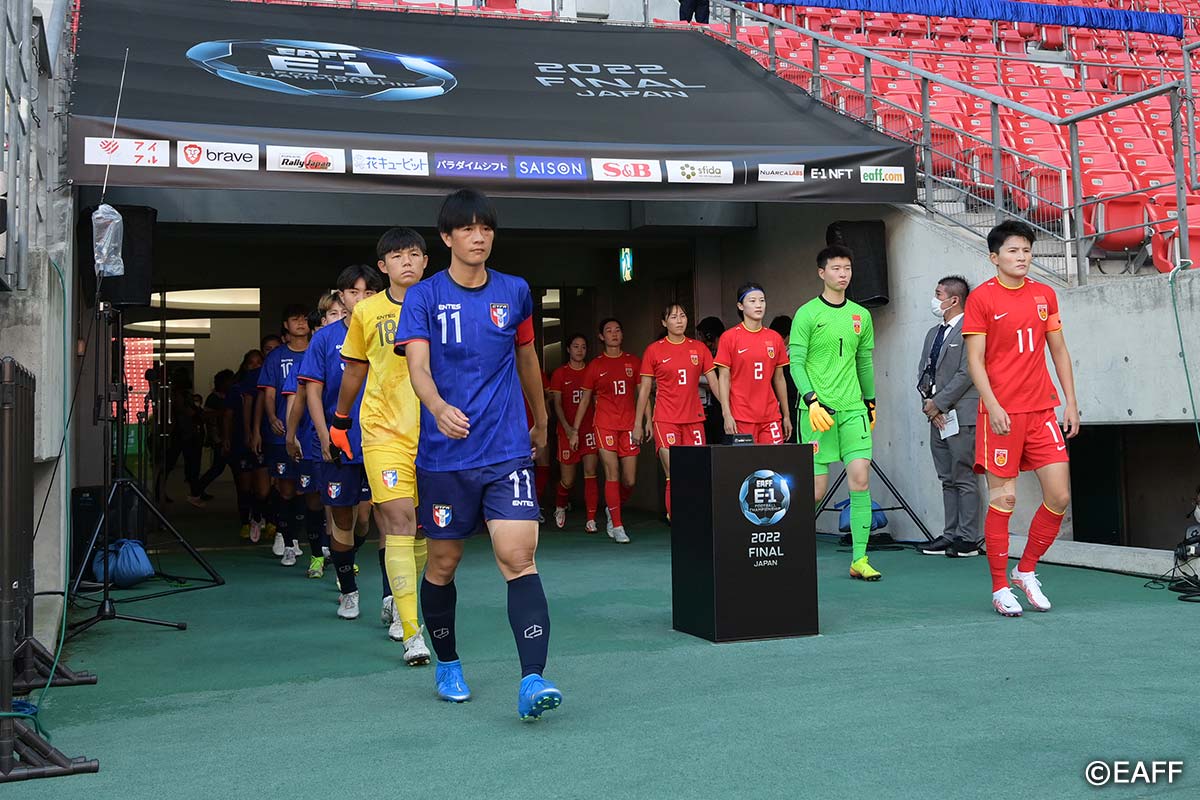 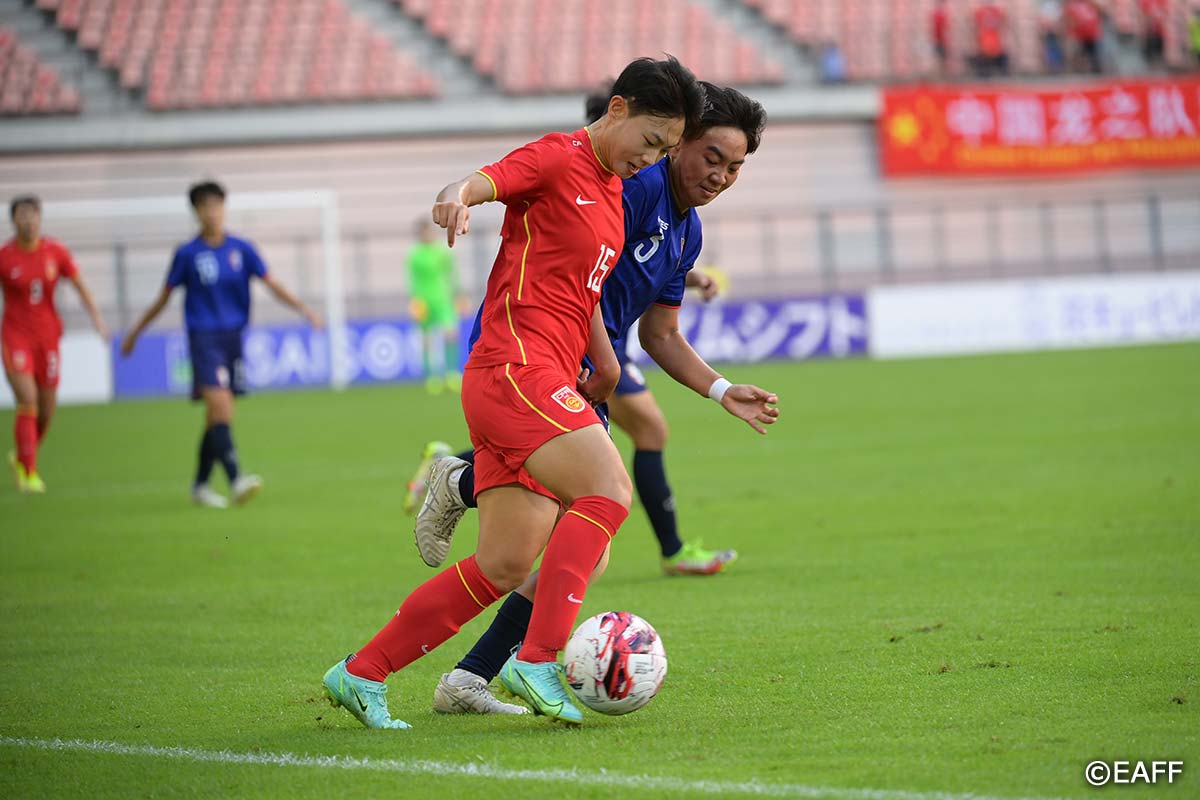 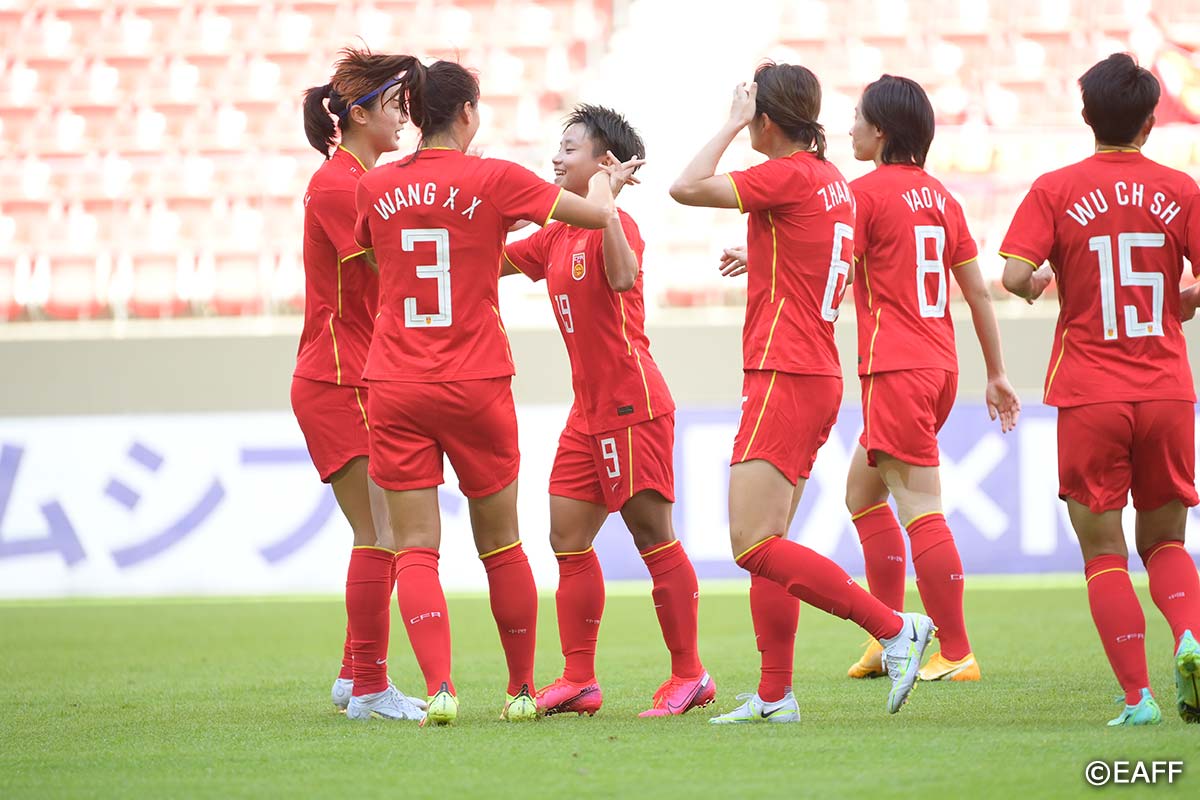 The second women’s match of the EAFF E-1 FOOTBALL CHAMPIONSHIP 2022 FINAL JAPAN was held July 20th at Toyota Stadium in Toyota, Japan, with China PR facing off against Chinese Taipei. There was some early excitement when China PR midfielder WANG XIAOXUE attempted to head in a corner kick during the opening minutes, but was stopped by Chinese Taipei goalkeeper CHENG, SSU-YU.
China PR continued to press, and their efforts paid dividends in the 12th minute. Defender WANG SHANSHAN took advantage of a gap in the penalty area to pass the ball to ZHANGLINYAN, who scored the first goal of the game for China PR and her first as a player for the national team. Five minutes later, China PR came close to extending that lead when WANG SHANSHAN headed a China PR corner kick off the crossbar.
Chinese Taipei's woes were not limited to the scoreboard.TING, CHI was injured in the 8th minute and LAN, YU-CHIEH in the 20th minute. In the 22nd minute, China PR midfielder YAO WEI made a pass into the penalty area. Chinese Taipei defender SU, SIN-YUN attempted to clear, but poor ball handling resulted in an own goal, gifting China PR with a 2-0 lead. Chinese Taipei received a valuable corner kick in the 37th minute, but could not capitalize on the opportunity. On the opposite end, China PR`s ZHANGLINYAN had an excellent scoring opportunity from the penalty area at the end of the first half, but was denied by Chinese Taipei goalkeeper CHENG, SSU-YU.

Chinese Taipei came out of the locker room fresh ready for the second half, but were stymied by the excellent work of China PR goalkeeper ZHU YU. In the 54th minute, China PR player XIAO YUYI had a scoring opportunity from the left side of the penalty area, but the ball went out of bounds just outside the right goalpost. China PR continued their attack. In the 60th minute. China PR player YAO WEI fired off a blistering shot from near the penalty area and pounced on her own rebound, but was stopped by Chinese Taipei goalkeeper CHENG, SSU-YU.
Chinese Taipei took another free kick in the 75th minute, doing a dump-and-chase into the penalty area. China PR goalkeeper ZHU YU was injured during the ensuing struggle, but was able to return to the pitch after treatment. In the 88th minute, Chinese Taipei had a last-gasp scoring chance to avoid being shut out when CHEN, YEN-PING took a shot from near the penalty area, but the ball hit the crossbar. The game ended shortly thereafter in a 2-0 China PR victory.