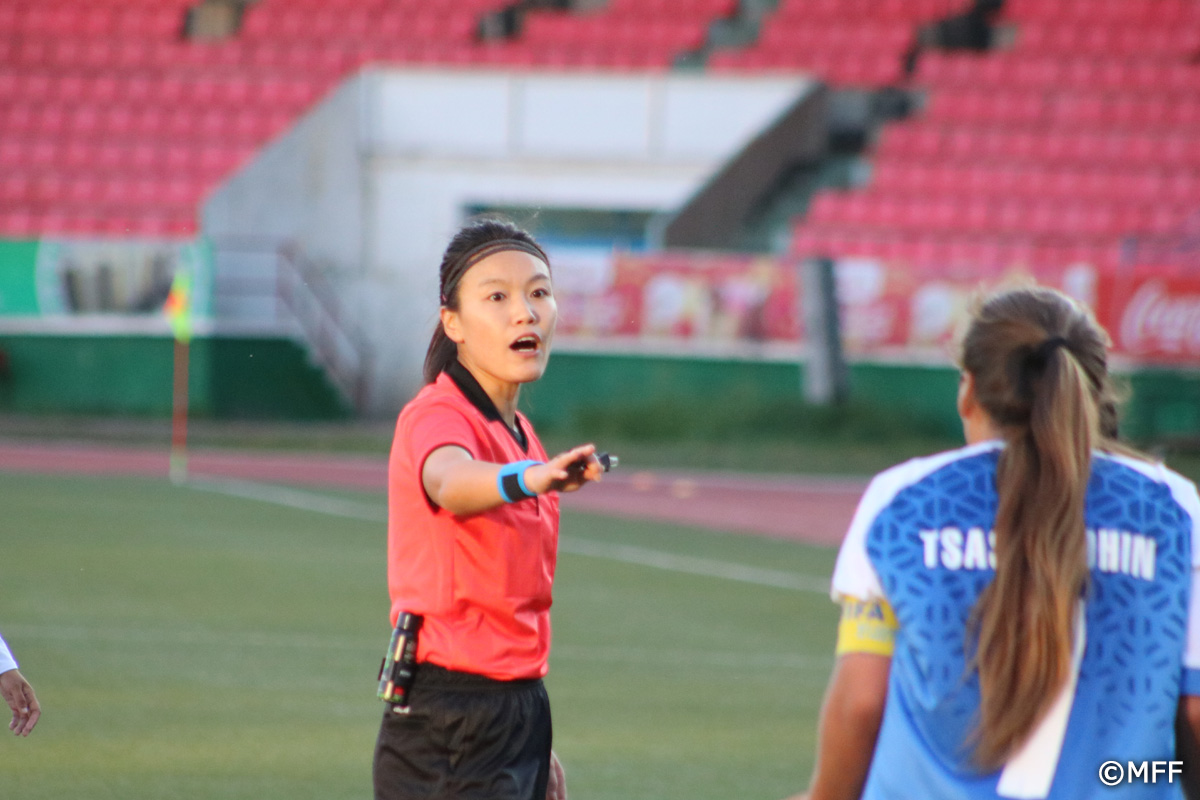 The second game of EAFF E-1 Football Championship Round 1 Mongolia women’s tournament was played at the Ulaanbaatar National Stadium in Mongolia on September 3rd, and was the debut of the Mongolia women’s national team.

The Mongolian women took possession of the ball and were threatening in the opening phases of the match, but it was the Northern Mariana Islands’ team that took the lead in the 11th minute. A quick counterattack on the right flank turned into a terrific run by GRIFFIN Gianna Long, who finished the play with a goal.

In the 21st minute, a through pass was brought under control by CASTILLO Jeralyn Santiago. She entered the penalty area after beating an offside trap and coolly flicked the ball past ERDENEBILEG Tsendjav to double the visitors’ lead.

Mongolia was in control for the rest of the half but was unable to score. One close call came when captain ORGODOL Tsasan-Okhin lobbed the ball over BALLESTEROS Carla Mae Tarroza, only to have it fly over the crossbar and bounce out of play.

Six minutes into the second half, history occurred when sub NARMANDAKH Namuunaa’s drop from the left hit the back of the net and became the first official goal in the history of the Mongolian Women’s national team.

On the wings of this enthusiasm and supported by the local fans, the home side pushed for an equalizer. The players began to tire, but their determination was rewarded in the 61st minute during a scramble in front of the goal in which sub GANCHIMEG Tsolmon managed to push the ball into the goal.

The comeback was complete in the 82nd minute when NARMANDAKH took a rebound and parked it into an open goal, giving Mongolia a victory to be remembered.

It was a hard-earned victory for Mongolia. The Northern Mariana Islands team also put on a great team performance and showed great improvement from previous tournaments.

Mongolia Manager TSEDEVSUREN Ganbold:
“I am so proud about the girls. This team, however, is not only the 18 girls and the coaches: it is the team of all Mongolian people.

“Thanks so much for those who have supported us today here at the stadium, and please come for the next two games, we will keep doing our very best.”

Northern Mariana Islands Manager KOO Luam Khen:
“I think we played very, very well, but we made some bad mistakes that cost us the match.

“Mongolia are very new to the game, they are not experienced, but they kept coming. And of course the home fans and their support made a big difference.

“Our team is very young, our football is very new, but the girls did very well.”

Mongolia 13. NARMANDAKH Namuunaa, who scored two goals
“I scored the first goal ever in the history of the Mongolia Women’s team, I am so happy about it.

“I want to thank my family, my friends and all the coaches who taught me football. I know sometimes I was not good, but now I promise I will never stop playing football”

Northern Mariana Islands 8. GRIFFIN Gianna Long, who scored the first goal of the match
“It was the first time I played for the national team, and I am very proud of it and of the team. Even though we lost, we showed we have the capability to win. We can do it in the next game, and I am looking forward to it.

“It was the first time for Mongolia playing internationally, but they proved to be already a very strong team, they have a lot of skill, especially their defense. It was very difficult to play against them, but we learned a lot and we got better.”