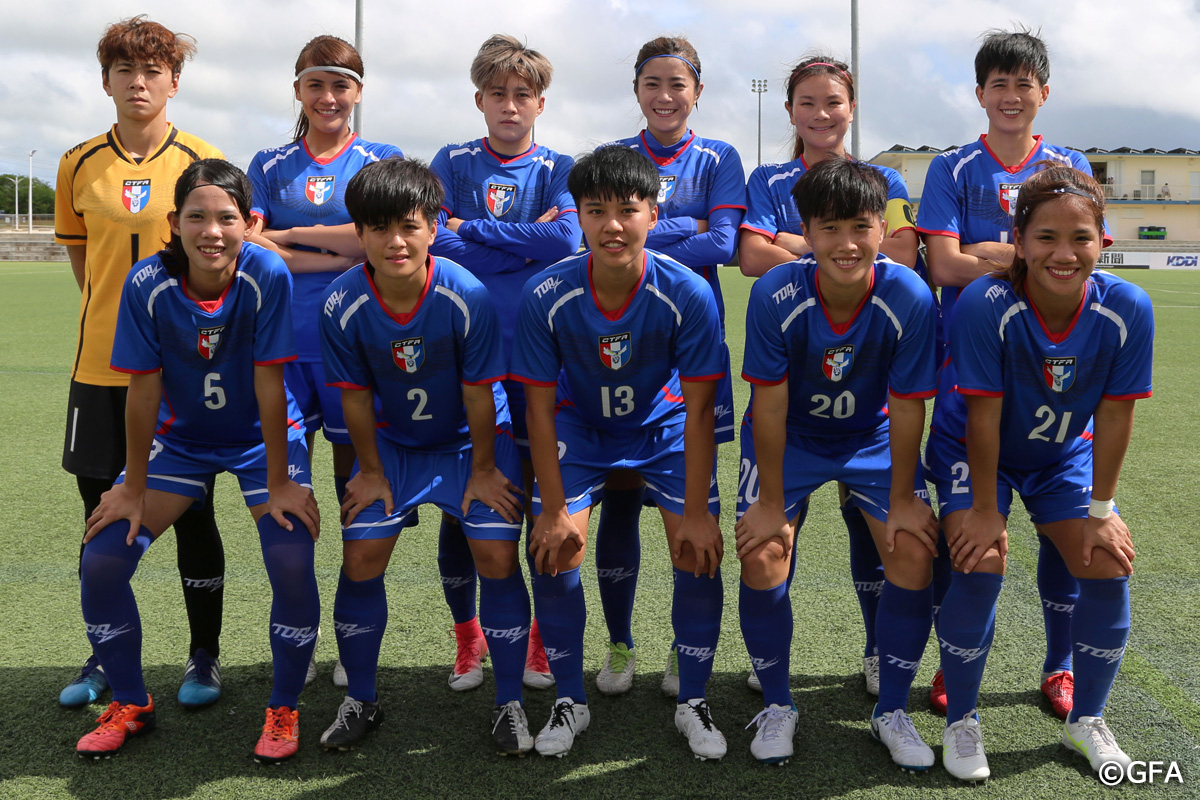 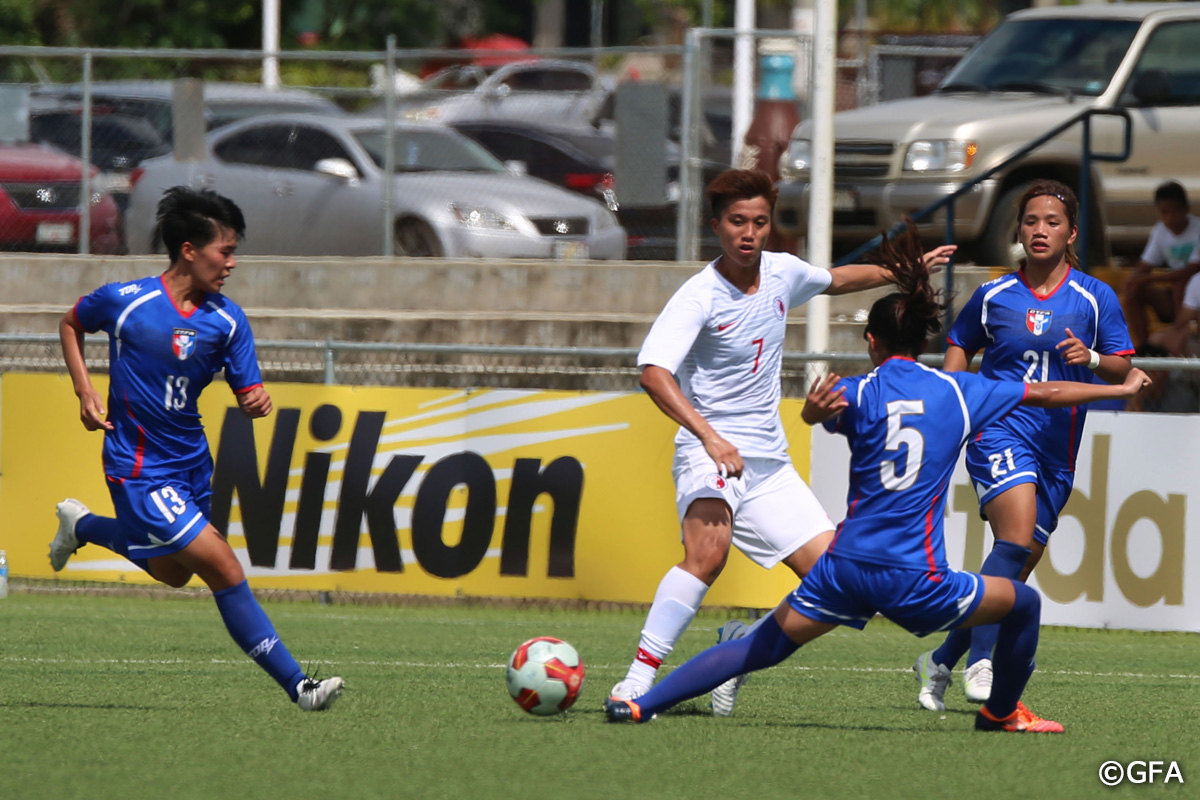 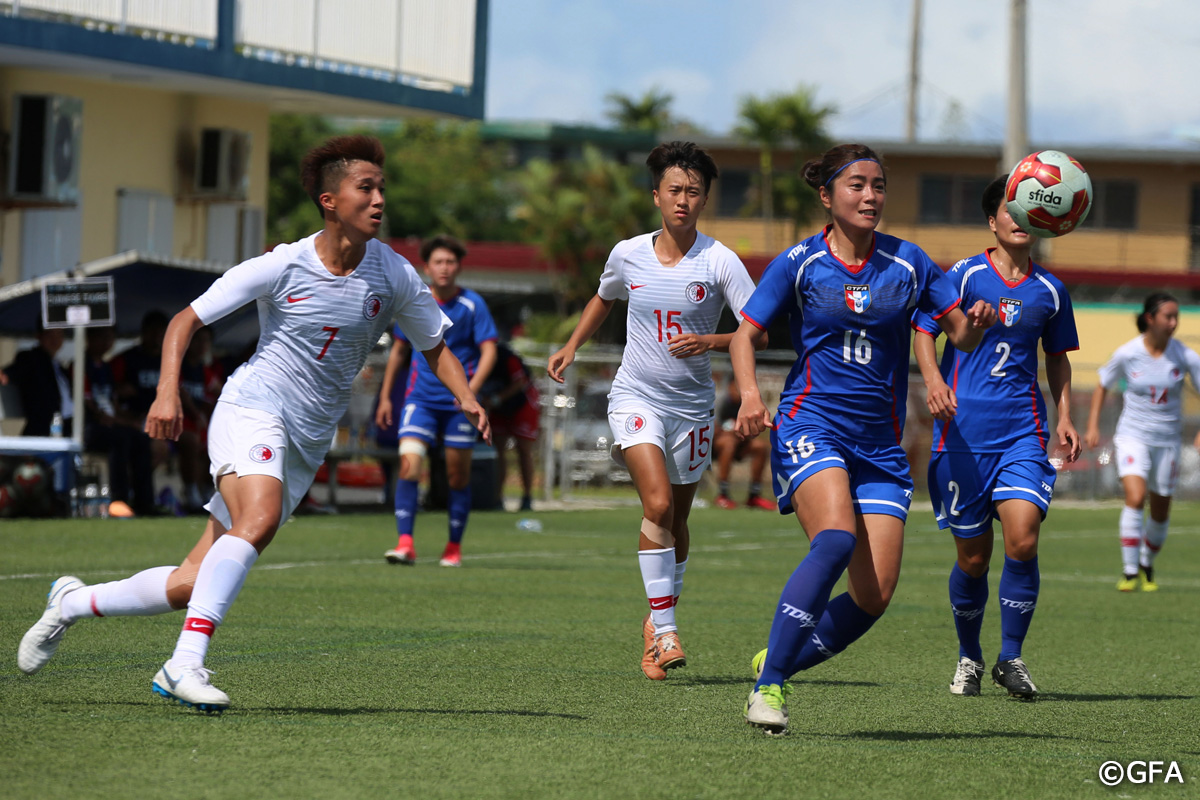 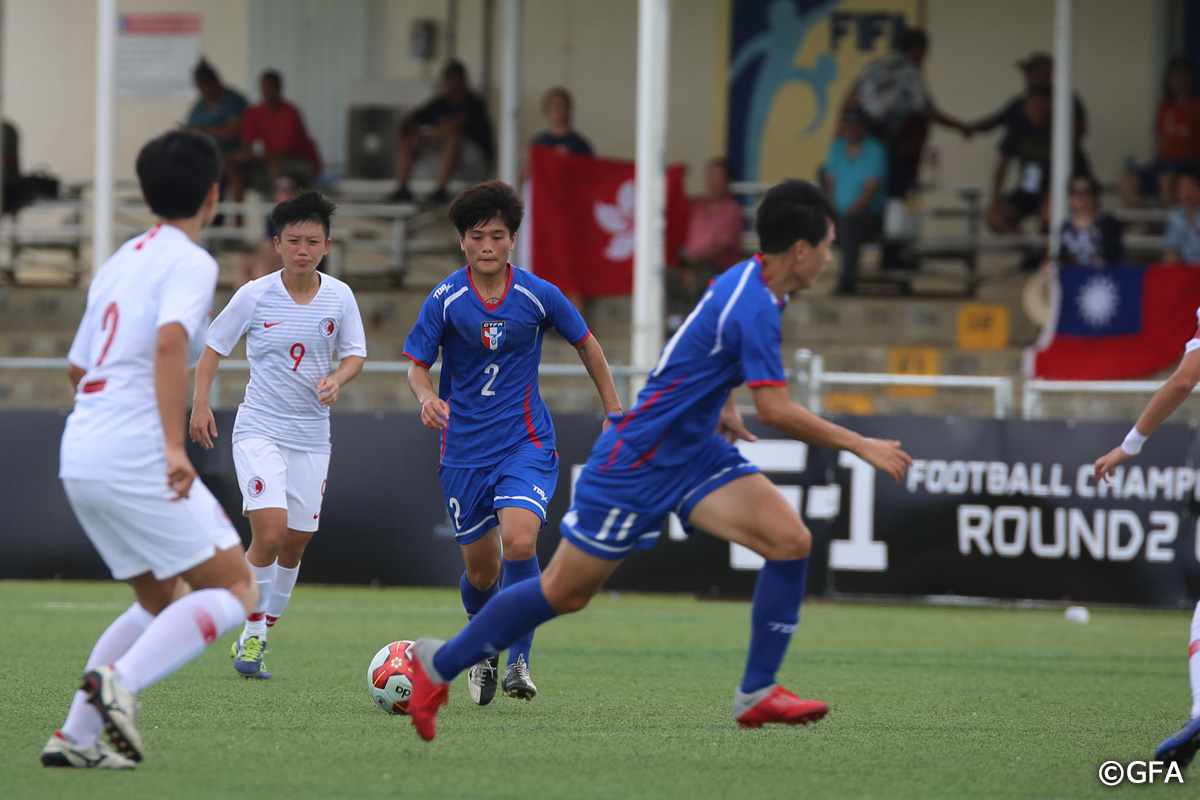 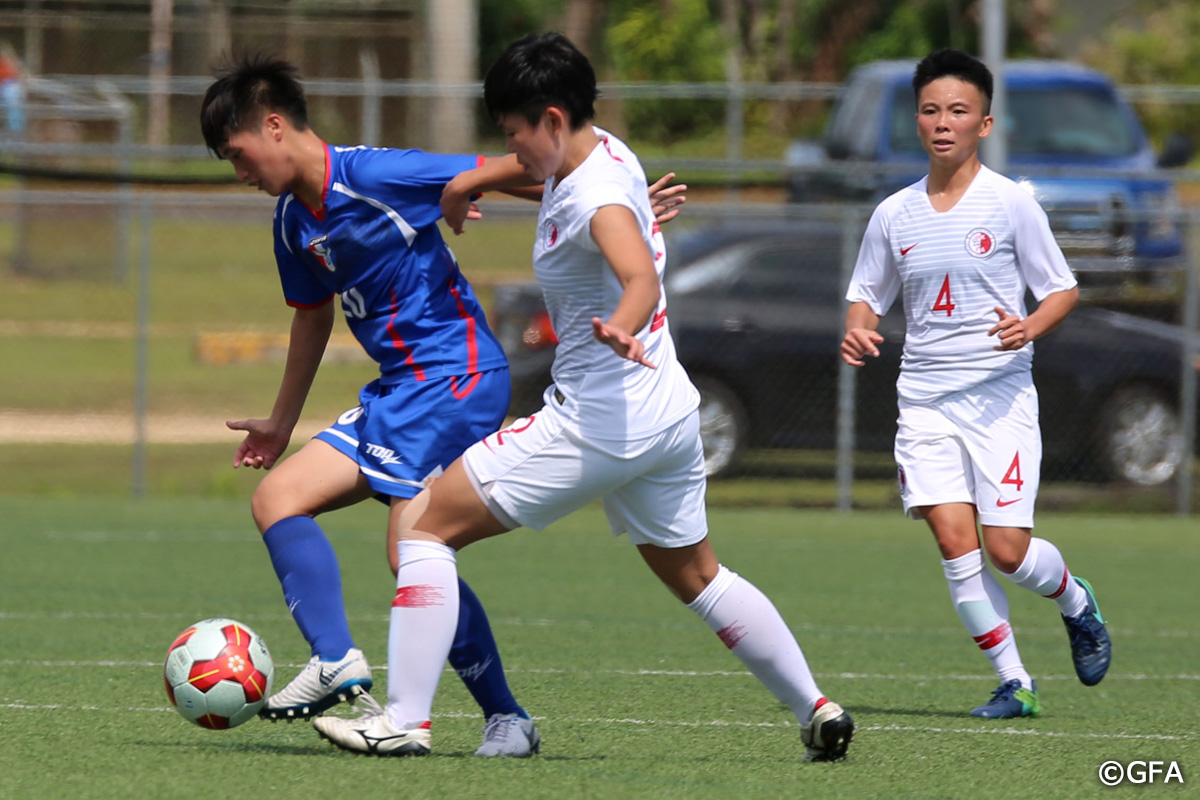 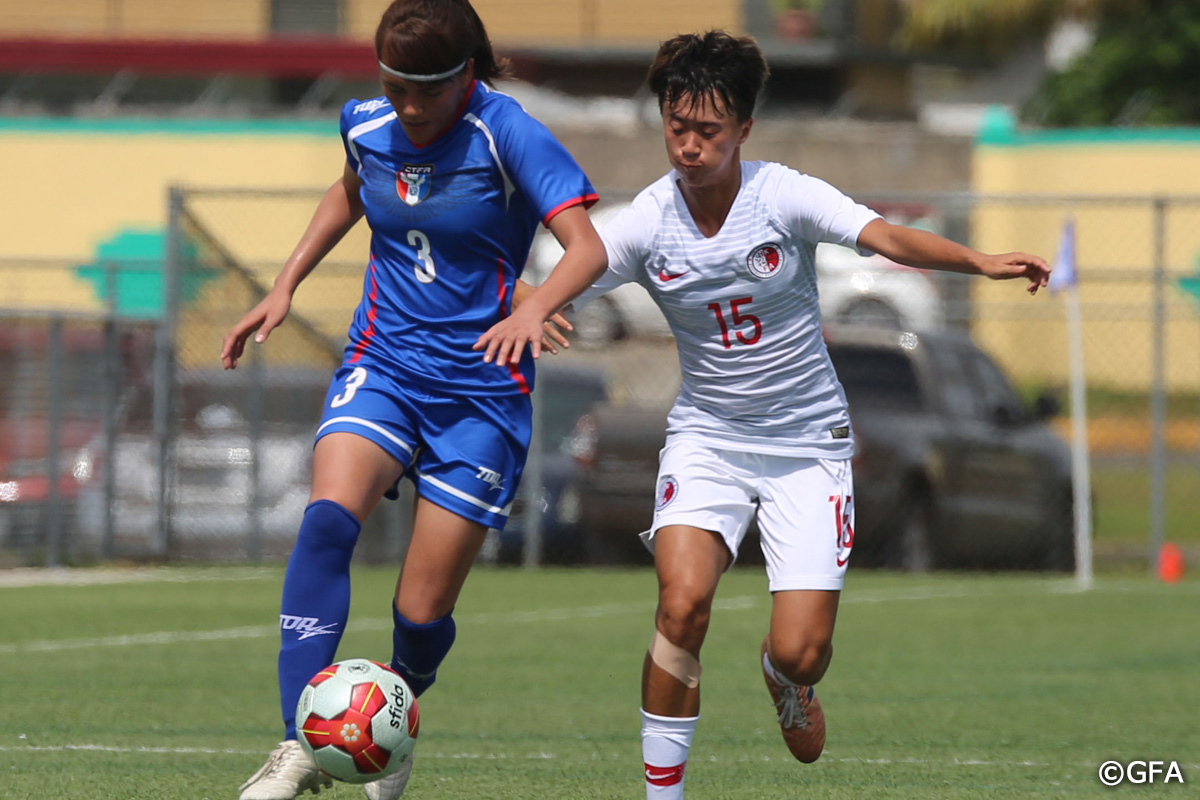 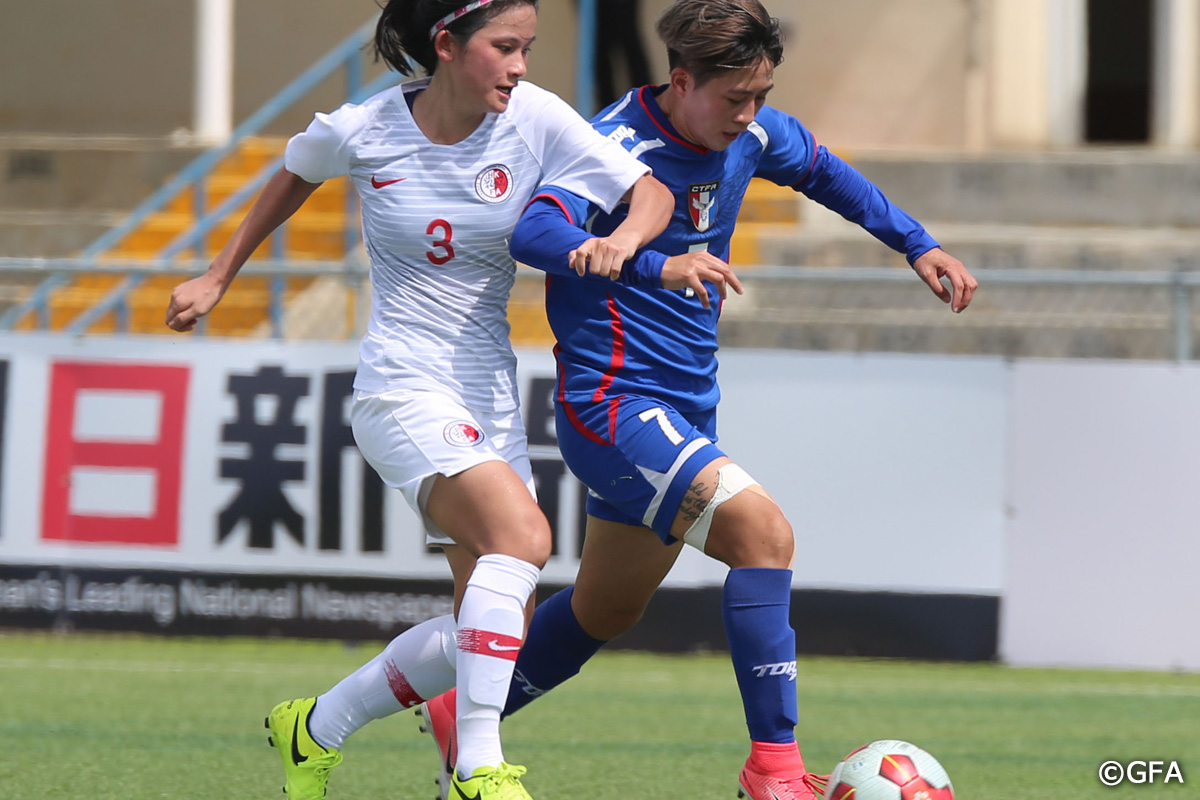 The first scoring opportunity for Chinese Taipei came at the 19-minute mark when CHI TING dropped a cross in from the right to YEN-PING CHEN, who avoided the Hong Kong offside trap and beat the coverage to the ball. Unfortunately, her header lacked both power and precision and bounced off target.

8 minutes later, YEN-PING CHEN again escaped on the left wing and dribbled all the way to the goal, but goalkeeper CHEUK WAI NG denied her with a save.

In the 28th minute, Hong Kong finally knocked at Chinese Taipei’s door. SO HAN WONG connected a left cross to YUEN TING WAI, but her volley hit the side of the net.

The deadlock was finally broken in the 34th minute by YING-HUI CHEN’s shot from 25 meters. The ball flew right under the crossbar, giving CHEUK WAI NG no chance at a save.

Hong Kong had other chances to tie the game early in the second half. In the 53rd minute, WAI KI CHEUNG slid in a cross that bounced back to her, but her shot could not find the back of the net. Then in the 69th minute, a perfect ball filtered through to set up YUEN TING WAI alone in front of the goal, but her shot went wide.

Less than a minute later, substitute HSIN-HSUAN PAO broke away on the right and passed to YEN-PING CHEN, who only needed to tap it into the goal to double Chinese Taipei’s lead.

Hong Kong desperately tried to get back in the game, and had other chances to score. In the 77th minute, YUEN TING WAI’s lob was cleared on the line. Ten minutes later, WAI KI CHEUNG completed her unlucky day with a shot that hit the crossbar.

Chinese Taipei was the more accomplished team and made better use of the scoring chances they created. However, Hong Kong showed great improvement from their previous appearance in the tournament two years ago. Had the quality of their finishing been better, the result could have been very different.

Interview with Hong Kong Head Coach JOSÉ RICARDO RAMBO:
“Today we used a lot of young players, and I was pleased with their performance. However, our passing and our finishing in particular needs to improve.

“Chinese Taipei controlled the ball better, they were good at passing. With this heat it is important not to make mistakes, because then it takes extra-energy to recover from them.

“We put a lot of effort into the young players, today we had three who had their international debut.

“But we must minimize small mistakes, as we know that they can make the whole difference between winning and losing.”

Interview with Hong Kong Captain 6. WING SZE CHAN:
“I think we played a good game, especially in the first half.

“It got much harder for everybody in the second half, mostly because of the heat.”

Interview with Chinese Taipei Head Coach SHIH-KAI YEN:
“Today we won the game, but we need to defend better. We conceded several chances to Hong Kong.

“Looking at the next game, we know the Mongolian team because we have played against them in the Olympic qualifiers two weeks ago. We will try to control the next game, as well as saving some energy in view of the final match against China.”

Interview with Cheese Taipei Captain 8. HSIANG-HUEI WANG:
“We had a good result, but the Hong Kong team played very well. Especially when they counterattacked, they gave us some problems. But it is good to see Asian teams getting better.

“Now we will do our best to recover and to be ready for the next match.”