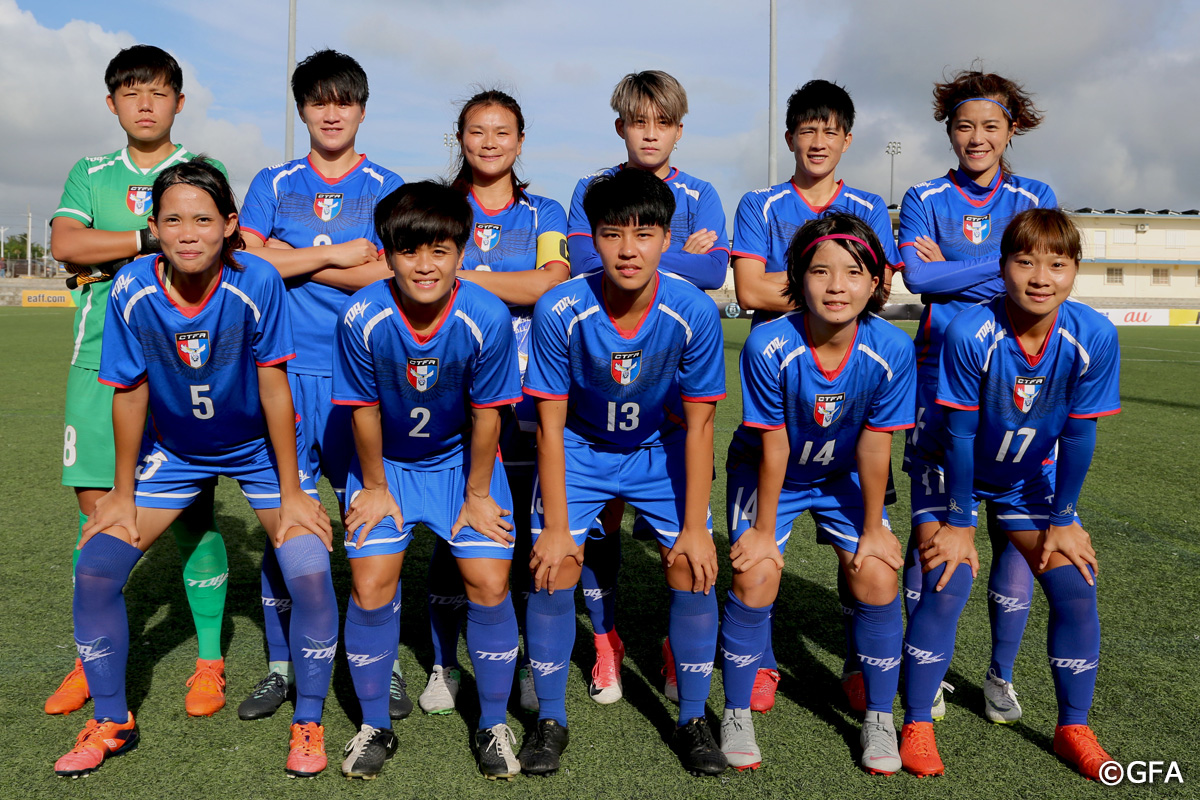 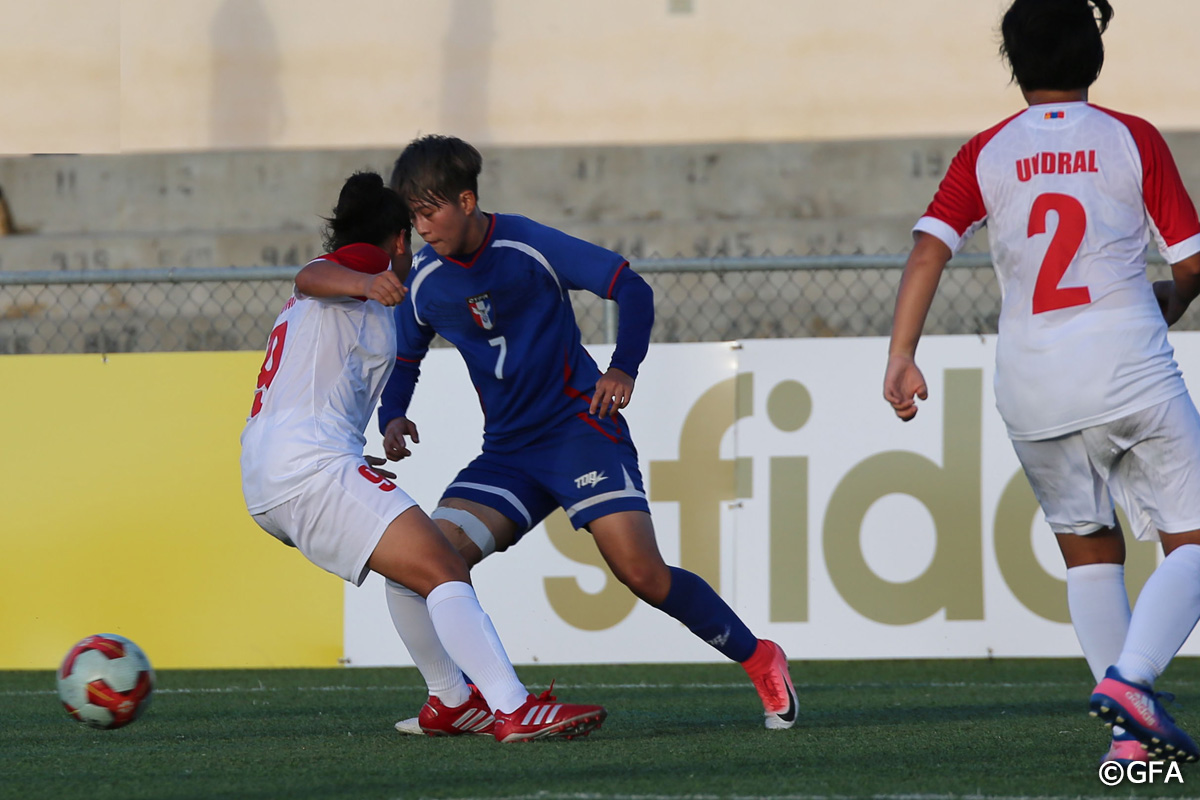 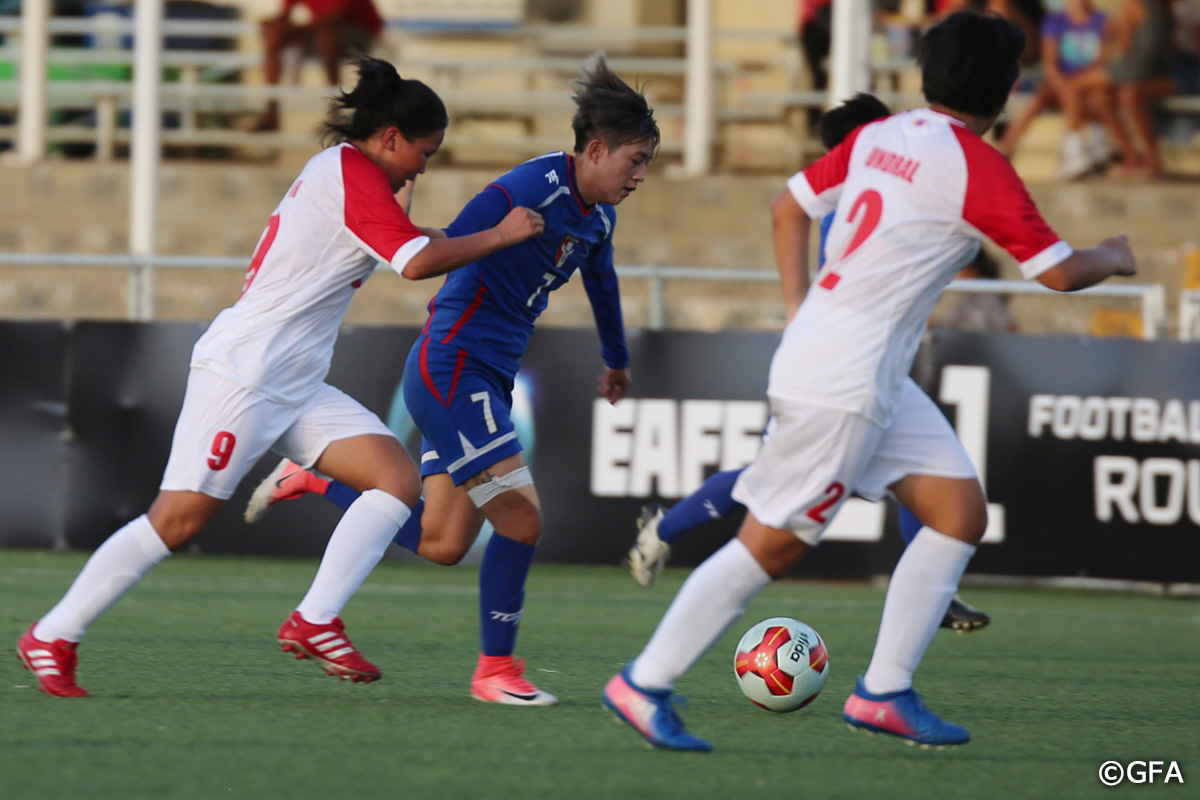 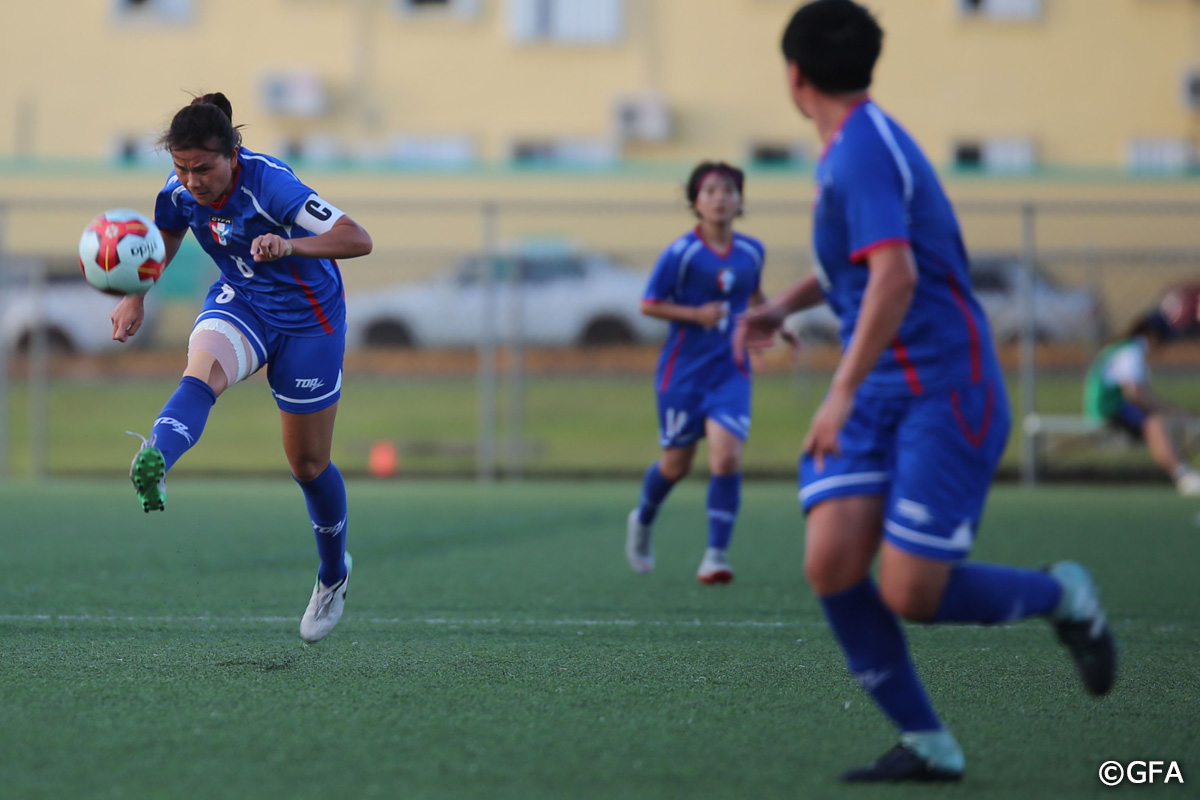 The afternoon match of the second day of the Women E-1 Football Championship Round 2 saw Chinese Taipei taking on Mongolia.

In the opening minutes, Chinese Taipei enjoyed more possession and created a few chances. The best opportunity to score the opener came in the 8th minute as Mongolia built a quick counterattack, but UNDRAKH ULZIIBAYAR’s shot from distance went just wide.

On the 14th minute, Chinese Taipei was awarded a penalty. One minute later, HSIU-CHIN LEE opened her account by burying one into the net past goalkeeper TSENDJAV ERDENEBILEG.

In the 28th minute, TSENDJAV ERDENEBILEG missed the catch from a long cross and accidentally dropped the ball in front of an open goal. This allowed HSIU-CHIN LEE to claim her brace with a goal.

Mongolia defended aggressively as the game continued. Perhaps too aggressively, as they earned three yellow cards in the first forty-five minutes and one more five minutes into the second half.

That aggressive play became costly in the 52nd minute when Chinese Taipei scored off of a penalty kick. HSIU-CHIN LEE changed the angle of her approach by shooting to the left, converting the penalty to a goal and giving the Chinese Taipei striker a hat-trick for the game.

Six minutes later, an unlucky clearance by the otherwise focused Mongolian defense set up LI-CHIN LAI right in front of the goal, allowing the striker to slam the ball home for Chinese Taipei’s fourth goal.

In the 75th minute, substitute YING-HUI CHEN dribbled inside the Mongolian box and placed a perfect drive right under the crossbar to make the score 5-0.

Four minutes later, HSIU-CHIN LEE deflected a high cross with her head to net her fourth goal of the day, making the final score 6-0 in favor of Chinese Taipei.

Chinese Taipei now will face China PR and Mongolia will meet Hong Kong on December 5th, the last day of the tournament.

Interview with Mongolia Manager GANBOLD, TSEDEVSUREN:
“The first time we played Chinese Taipei we lost 9-0, today it was 6-0. Our young team is improving, next time against them we will aim for a victory.

“We conceded two penalties and we were awarded four yellow cards… But overall, I am happy with the intensity of our game. Football is a contact sport, maybe the referee was a bit too severe.

“Our team is very young, we need time to get better and we are working on that. I think that already in a couple of years we will be ready to surprise the rest of Asia.”

Interview with Mongolia 8. ALTANTUYA, ALTANSUKH:
“First of all, we are very happy to be in Guam. We came to play football, but we are also enjoying each other’s company. For example, after eating or training we gather in the hotel rooms to chat, or we go to the ocean beach, which is very beautiful.

“We are a very tight group of friends. On the pitch as well as outside of the pitch, we always support each other. We are like a family.

“Our youngest player is 14, while the oldest is 25. We will keep playing together for the next five, ten years, so get ready for us!”

Interview with Chinese Taipei Manager SHIH-KAI, YEN:
“Unfortunately we had some injuries, it was a rough match. The first half was hard, but we found our tempo into the second half, and I am very grateful to my players for the way they played and what they accomplished.

“Now we have the last game against China PR. They are a strong team, and the main thing to begin with will be to defend well and make good use of our chances when we attack.”

Interview with Chinese Taipei 9. HSIU-CHIN, LEE:
“I scored four goals, but the only important thing is that they helped the team. Two of them were penalties. I practiced them a lot, so I was capable to kick them very differently.

“It was a tough game, but me and my team-mates knew how to take care of ourselves. We tried not to talk too much with the referee, because it doesn’t help to do so.”