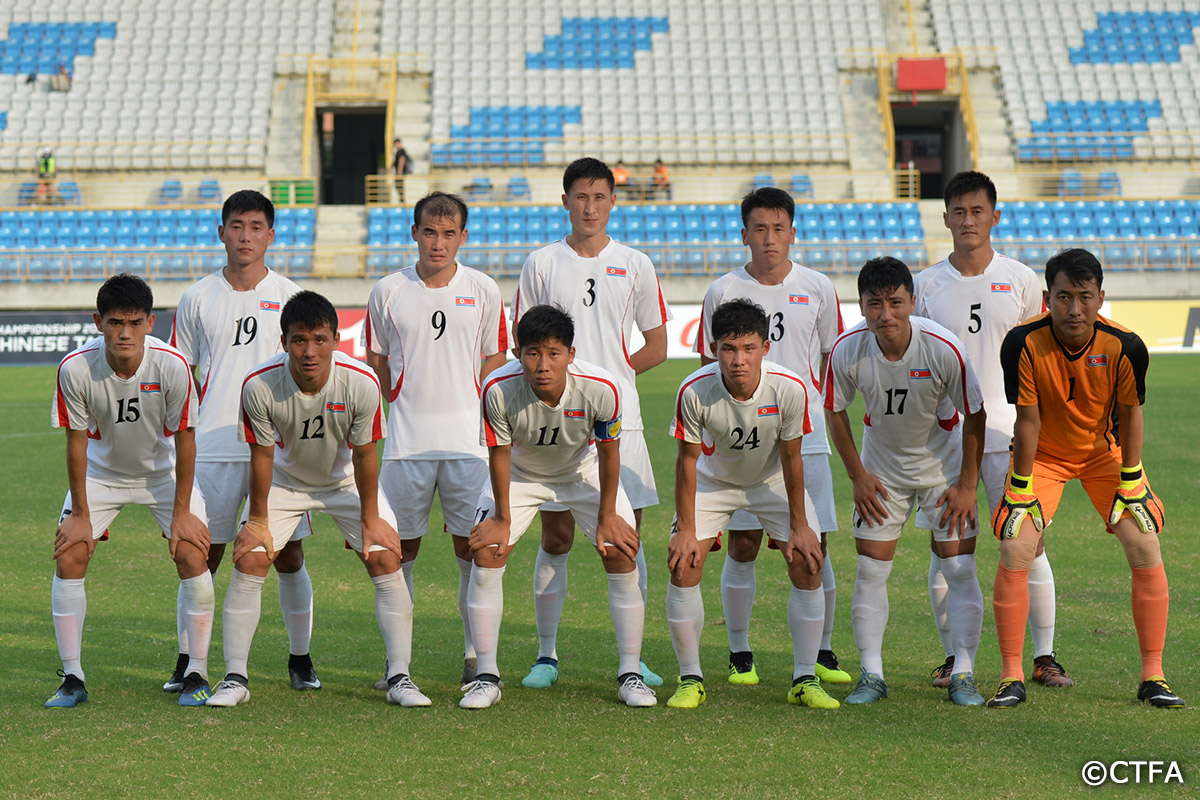 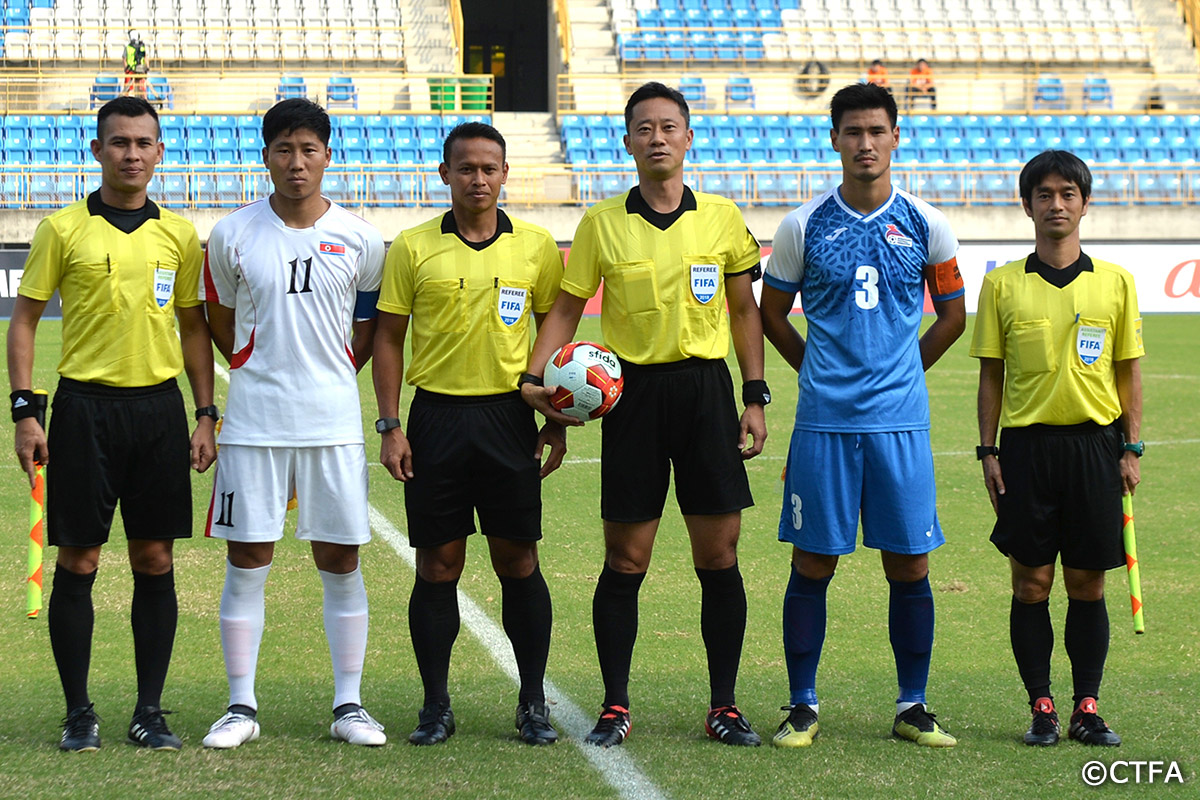 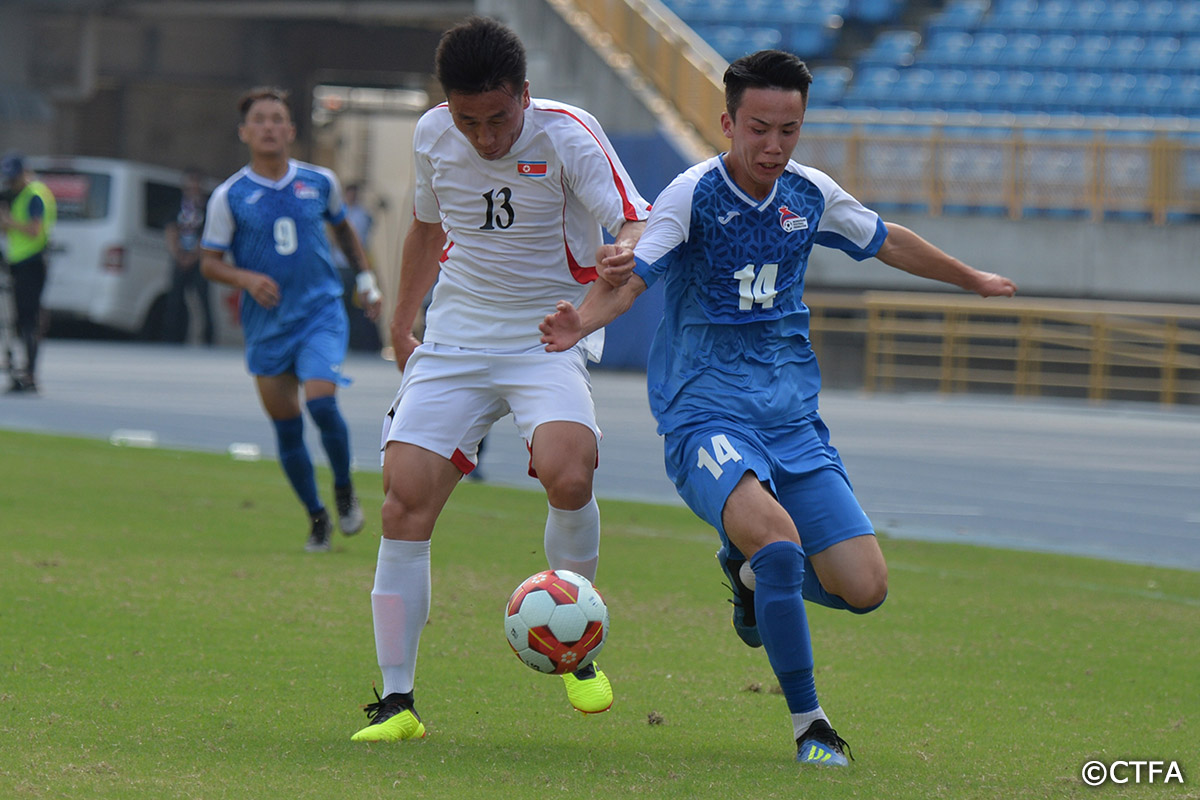 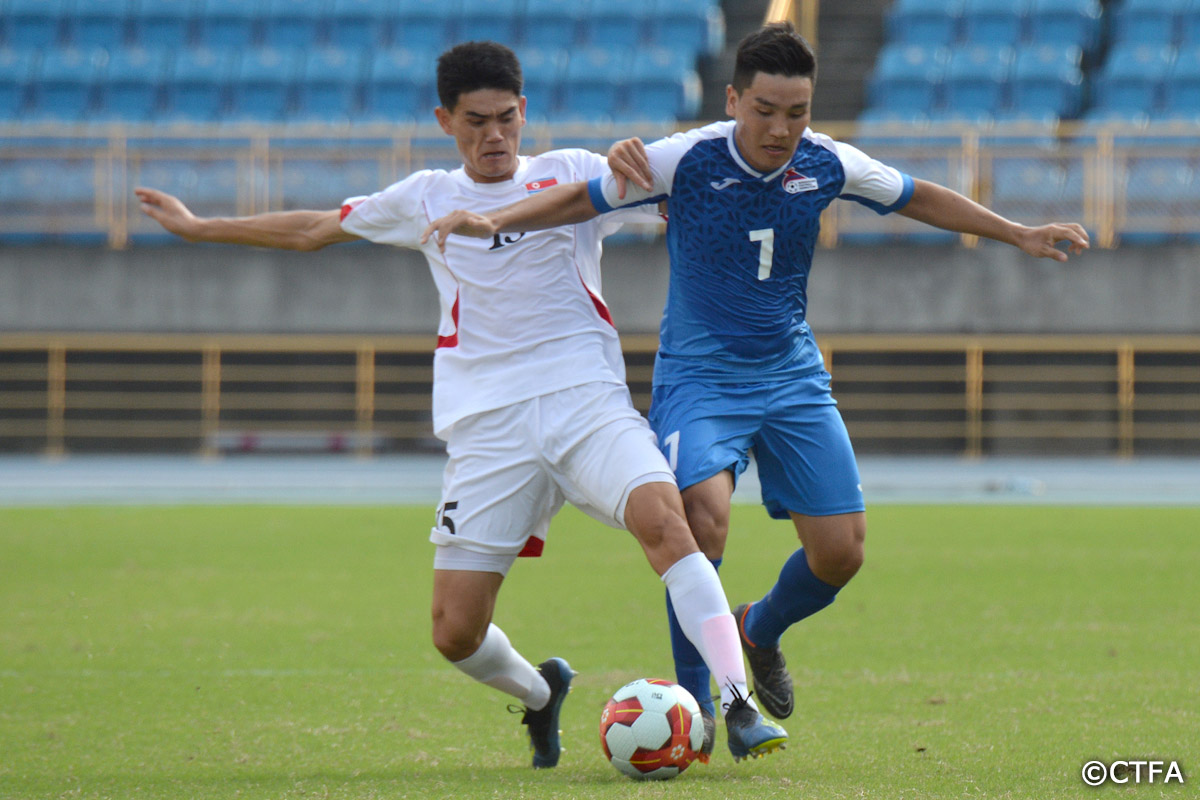 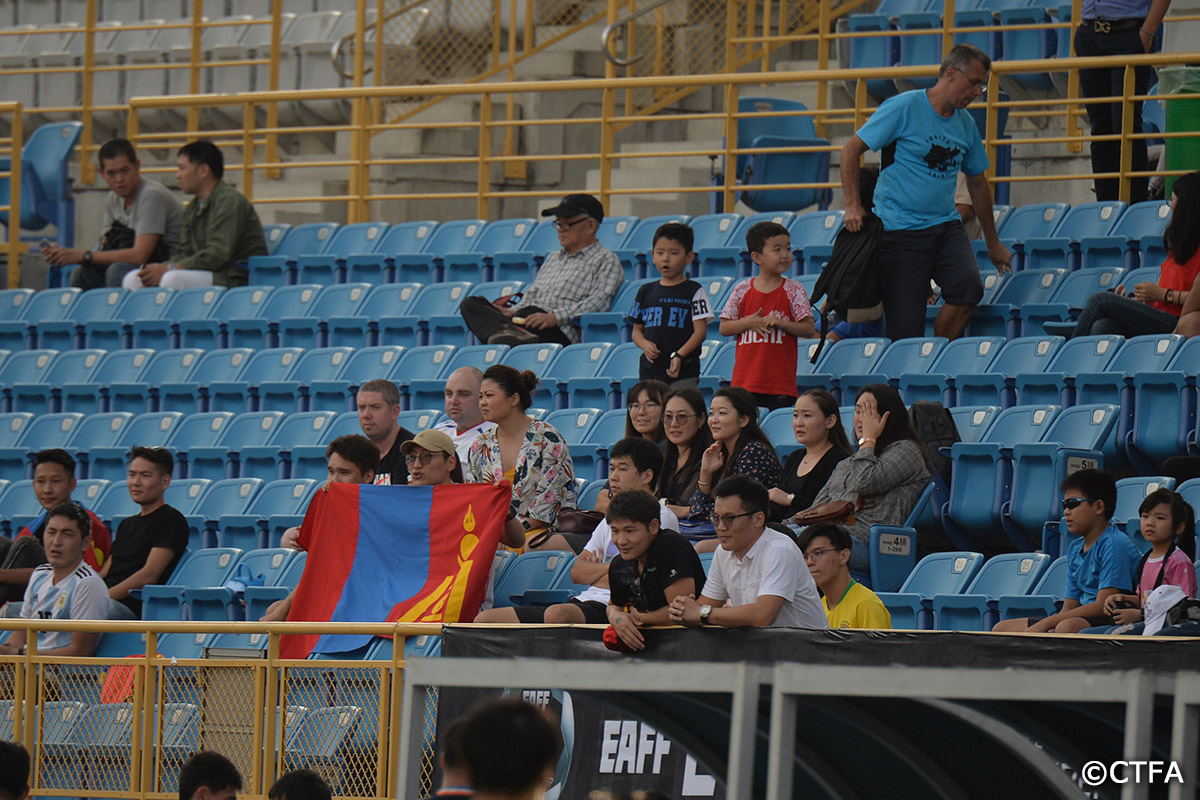 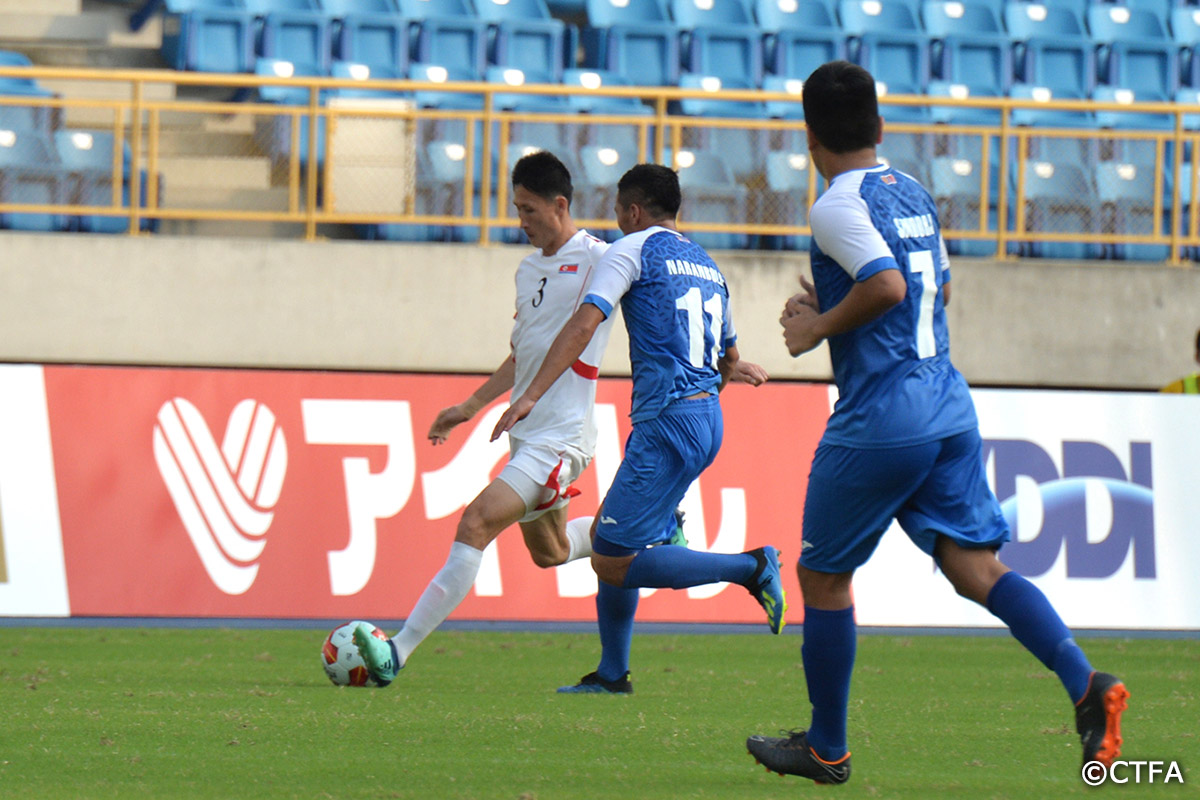 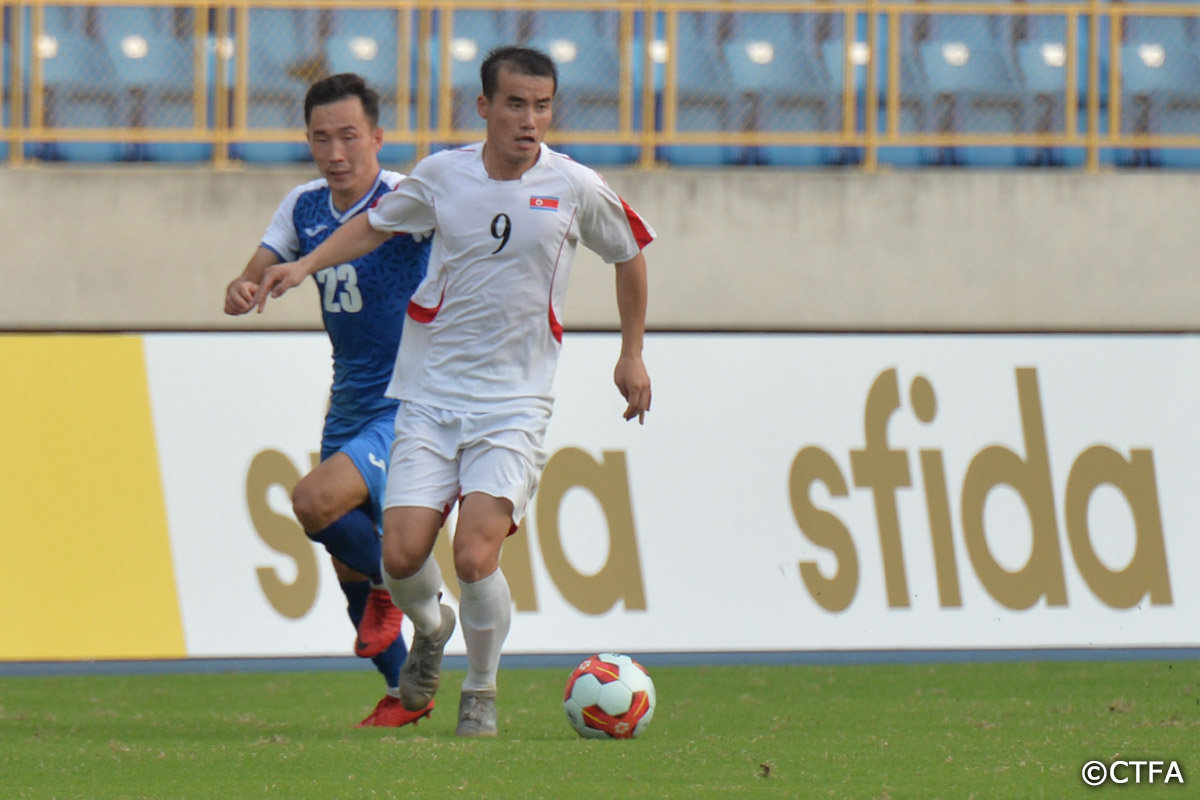 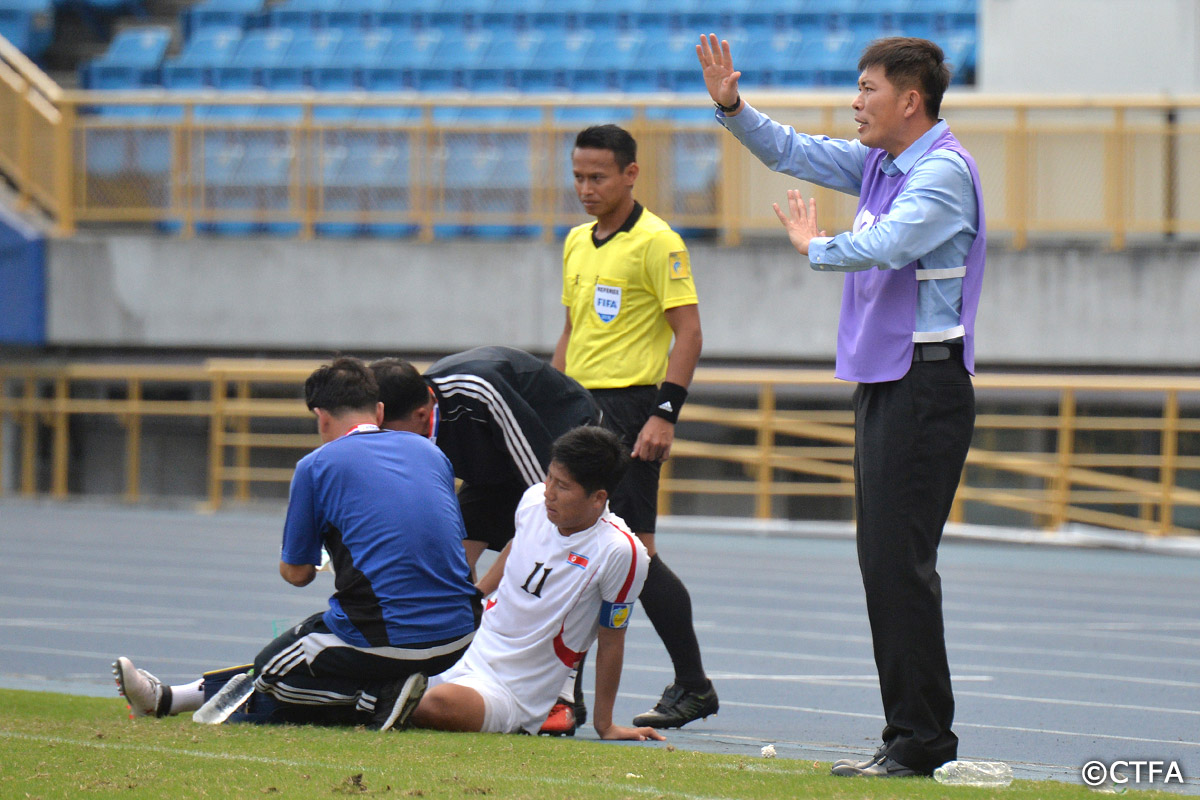 The 2nd round of the EAFF E-1 Football Championship 2019 kicked off on November 11th at Taipei Municipal Stadium with a game between DPR Korea and Mongolia.

DPR Korea did not waste any time. In the 8th minute, a ball dropped out of the box and was picked up for a shot by KWANG HYOK RIM. MUNKH-ERDENE ENKHTAIVAN managed to get on it, but fumbled the ball into the goal.

Mongolia, who was playing in Round 2 for the first time in their history, held the pitch reasonably well but paid dearly for their aggressive play. During the first 30 minutes, referee
Minoru TOJO had to book three Mongolian players (TSEND-AYUSH KHURELBAATAR, ENKHBILEG PUREVDORJ, and DAVAAJAV BATTUR). In the 29th minute, TSEDENBAL NORJMOO took YU SONG KIM down right in front of the goal, which resulted in a penalty conceded to DPR Korea. YU SONG KIM did not miss, and doubled his side’s lead in the 30th minute.

In the second half, Mongolia seemed more comfortable offensively and held possession better with the coming of NARANBOLD NYAM-OSOR. But DPR Korea struck again--a perfect free-kick in the 54th minute by KWANG HYOK RIM surprised MUNKH-ERDENE ENKHTAIVAN on the far post and extended DPR Korea’s lead to three goals.

From then on, DPR Korea was in control. They added a fourth goal in the 64th minute as KUK CHOL KANG set up IL GWAN JONG in front of an open goal, allowing the forward parked the ball into the net.

In the 74th minute, Mongolia scored a consolation goal that might possibly be an early candidate for the Goal of the Tournament. Just inside the box, substitute NARANBOLD NYAM-OSOR controlled an airborne cross from the left and unleashed a powerful kick to beat DPR Korea goalkeeper MYONG GUK RI.

It was the final goal in a well-fought game that saw tournament favorite DPR Korea emerge victorious with a score of 4-1.


DPR Korea Head Coach YONG JUN KIM:
“In the first half we did well, but in the second we started to think about the next game, and I had some players who got injured during the match, so I am not very satisfied.

“The next game versus Hong Kong is the most important of the tournament for us, we need to be ready.”


DPR Korea 19. KWANG HYOK RIM:
“I did score two goals, but really, these are not my goals, they are the team’s goals. I am just a player, I serve the team. I need to do more in the next game against Hong Kong.”


Mongolia Head Coach HANS MICHAEL WEISS:
“We gave goals away too easily, despite the fact that we defended quite well for most of the first half.

“If you take that away, we actually did play quite well. It was the first time Mongolia was in Round 2 and I am very proud of the team, it is a learning experience.

“This is a young team, and has a great future, it will be very strong in three-four years, if we can continue the program well.”


Mongolia 1. MUNKH-ERDENE, ENKHTAIVAN:
“We did not do well enough in the back, but for the next game we will be better at doing what the manager asked us to do.”