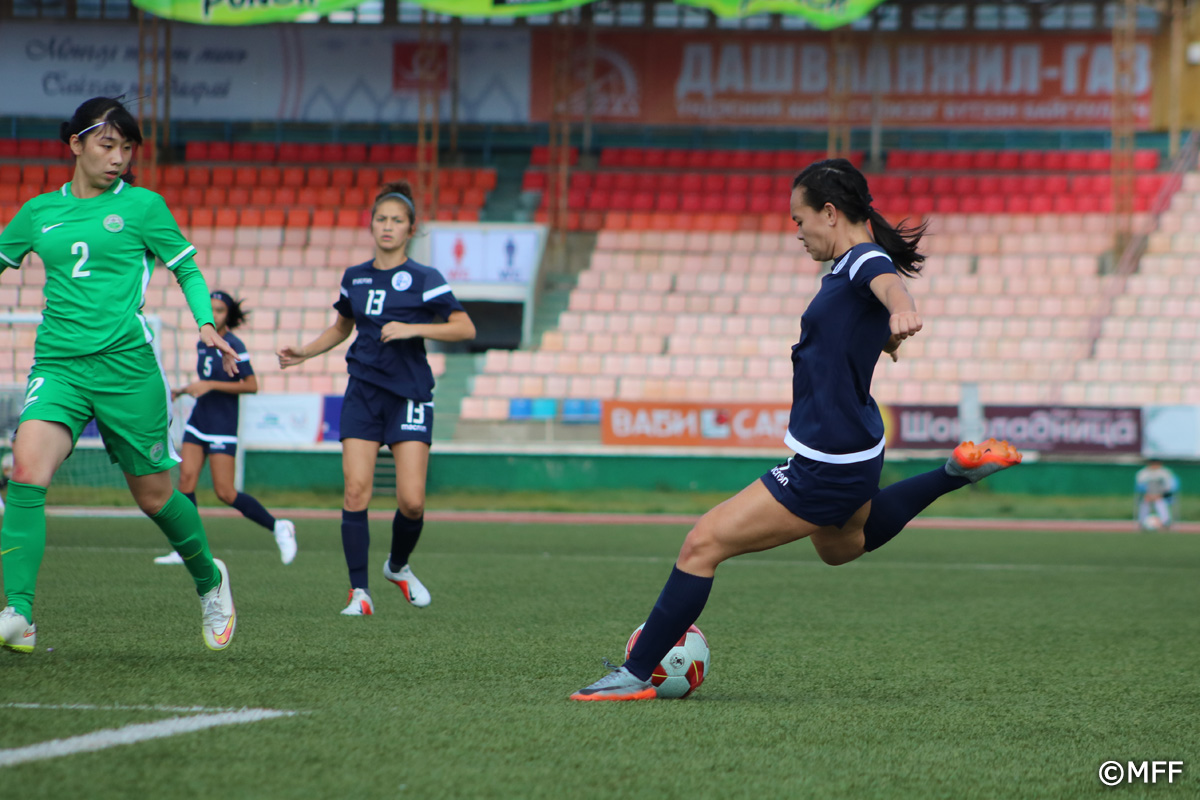 EAFF E-1 Football Championship Round 1 Mongolia women’s tournament kicked off at the National Stadium in Ulaanbaatar on September 3rd, starting with the match between Macau and Guam.

The Guamanians dominated from the opening minutes, and they took the lead in the 6th minute via a precise header by HOOVER Kaycee.

The Macanese team had difficulties on offense. However, their defensive organization showed great improvement since the 2016 tournament, and they were able to frustrate most of Guam’s attacks.

Guam had to wait until the 31st minute to increase their lead, when captain HOOVER used some classy dribbling to penetrate the penalty area and unleash a powerful shot.

The rhythm of the game did not change in the second half, with Guam pushing for more goals and Macau defending.

The third goal for Guam came in the 54th minute on another header, this time by MERRILL Jenna. It was followed by a fourth goal via a direct free-kick by HOOVER Riley in the 67th minute, and a fifth goal in the 73rd minute when NADEN Colleen capitalized on a through ball that beat the Macanese defensive line.

Despite missing some of their regular players, the Guamanian team put on a good showing, and are a favorite to qualify for the next round of the tournament.

Macau played well and will have more opportunities to shine in the next two games. A nod to goalkeeper HO Ka I--without several of her great saves, the score could have been much higher against Macau.


Macau Manager ZHANG Hong:
“Guam were very good, they have a very good development program and an Australian manager [PLEASE CHECK THIS INFO] but our players did their best.

“Our players technique is still not good enough, they are all part-timers: they have jobs, some are students, they can practice only three times per week.

“Mongolians too are very strong, physically too. We will do our best in the next two matches, and learn from our opponents.”


Guam Manager WILSON Belinda Elizabeth:
“Compared to the tournament in 2016, we now have better understanding of how we want to play. We are bringing in a new style of play into Guam’s football, and we are trying it here in this tournament for the first time. Today it went very well.

“The next game against Mongolia, the home team, is a tough one. We must respect our opponents, but we know we have a job to do, and we intend to continue what we did today, with the same mentality, hopefully to get a positive result”.


Macau captain 5. CHAN On Na
“We had played versus Guam before, and we know how good they are. We used this match to improve our physical skills.

“We made a couple of big mistakes in the first half, and we were tired into the second half, but we really did our best.”


Guam captain 21. HOOVER Kaycee Lillian
“I think we did very well. We are a new team, and we have new ideas to execute today and I think we did that really well.

“We have a lot of young girls in the team, they created a lot of opportunities and score some of them, which is what we were looking for.

“We are now very confident going into the next games. We are really looking forward to play Mongolia, who are very strong physically—as we are.”