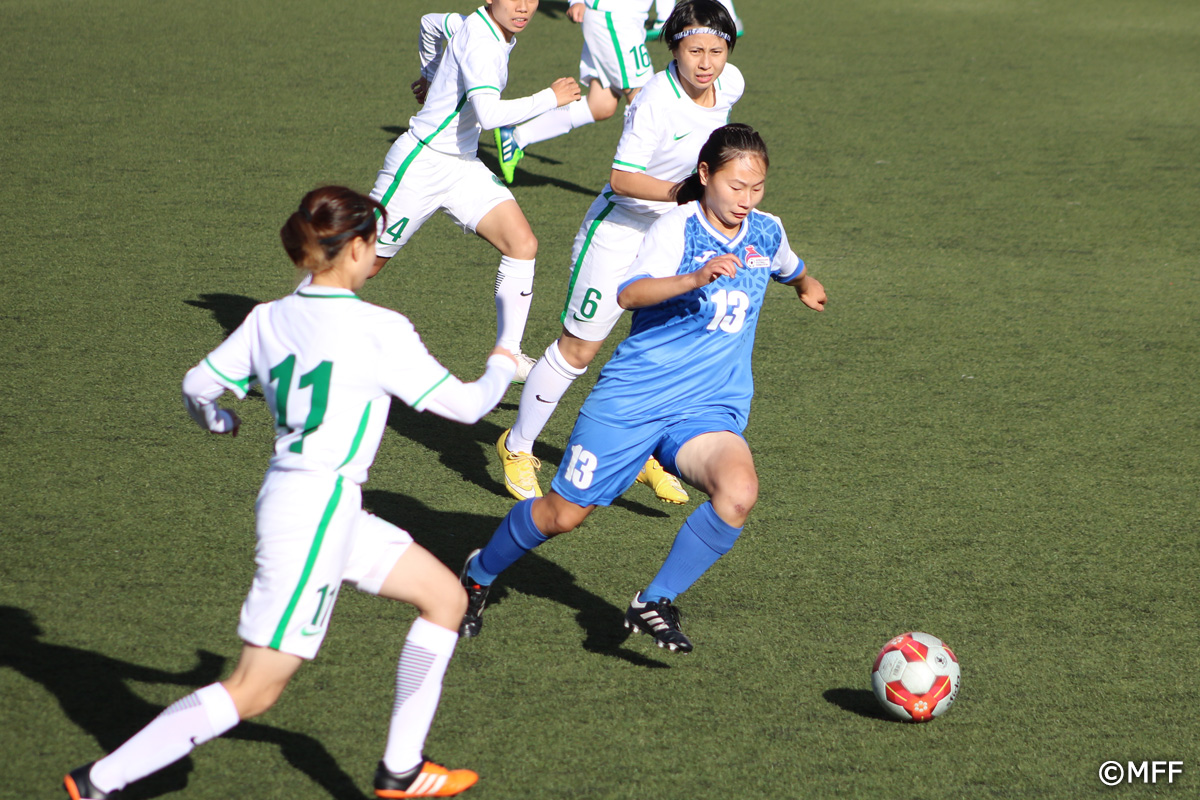 The match between the Mongolia and Macao women’s teams was played on September 7th at the MFF stadium in Ulaanbaatar, Mongolia. It was the last match of six days of exciting football from the EAFF E-1 Football Championship 2019 Round 1.

From the beginning both teams appeared tired from their third game in five days. The Macao women’s team, who had become popular in Mongolia for their positive attitude, played as a well-oiled defensive machine once they hit the pitch. It proved difficult for the Mongolian team to outmuscle their press.

There were only two chances for the home team in the first half: in the 37th minute, ORGODOL Tsasan-Okhin blasted a free-kick over the bar. Six minutes later, a clever flick by OTGONBAATAR Sarangarav provide an opening for NARMANDAKH Namuunaa, whose shot was saved by HO Ka I.

In the second half it was again OTGONBAATAR in the 56th minute who escaped on the left to loop around her opponent and take the shot against ORGODOL. The captain hit the ball at full power, but her drive was directed in the middle of the goal and saved.

The last proper chance for a goal again came from a shot by OTGONBAATAR. Though surely one of the best players of the tournament, she was tackled at the last moment and her attempt went go wide.

Both teams battled until the end but seemed too tired to build scoring chances. The game ended with a 0-0 score.

Failing to win the third game in a row does not detract from the achievements of the Mongolia women’s team, who are a welcome addition to the EAFF family. They won the tournament and will play in Round 2.

Macao once again showed a great attitude, and their hard work earned them a second point in the tournament. This was a deserved achievement for a team that has improved from their previous performance in Guam two years ago.


Mongolia Manager TSEDEVSUREN Ganbold:
“I am very disappointed that we could not finish with a victory, but overall I am totally happy with the girls for the tournament.

“In this tournament, we showed that our team was better than Macau, Guam and Northern Mariana islands, but we will see how well we can do in Round 2.”


Macau Manager ZHANG Hong:
“I am very happy. Mongolia played very well, they are a new team but improved a lot through the three games, and today as well I was surprised of how good they were.

“But we studied them and discussed them, and we had a game plan that worked out well for us”.


Mongolia captain 7. ORGODOL Tsasan-Okhin :
“In today’s game, things did not go as planned/ But during this tournament, I learned a lot about patience and mental stability. In the next round I know that I must be ready.”


Macau captain 5. CHAN On Na :
“Mongolia is a very good place, thou the weather keeps changing. Sometimes is very cold and then suddenly hot again. For us as a team it was not always easy to adapt to the weather

“However, as a football team we learned a lot in this tournament.

“The Mongolia team we faced today was very good, technically and overall.”