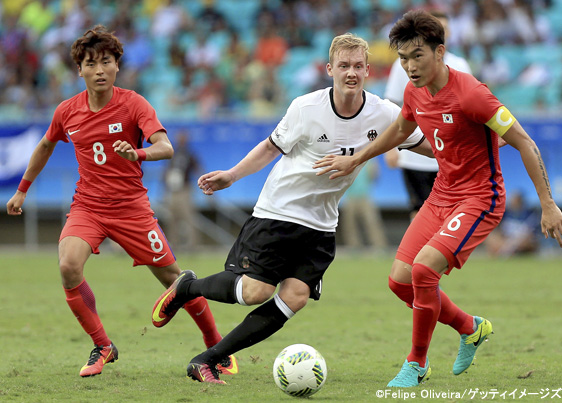 Tweet
Including forward Son Heungmin, three footballers from the Korea REP. full national team were added to the side. With this stellar lineup, the side was aiming for another medal after the one they got at the previous tournament. After securing a splendid 8-0 victory against Fiji, the team ended a heated exchange with Germany on a 3-3 draw. Their third match was a clincher against former champions Mexico. A defeat would have meant elimination. However, the side fought through, despite forfeiting possession of the ball in midfield. In the 78th minute, Kwon Changhoon collected a deflected ball that had come from a corner kick. The player dribbled past the defense, scoring a fantastic goal. Though the number of shots made by the two teams was different tremendously (Korea REP. 5 to Mexico’s 22 shots), the East Asian side managed to find their resilience and hold onto a 1-0 victory. The team was now through to the quarterfinals as the group winners.

Unlike their match against Mexico, Korea REP.’s battle for a spot in the semis against Honduras saw the team’s fortunes change for the worse. Despite their offensive force and possession of the ball, the team was denied a goal by some fine saving by the opposition’s goalkeeper. In the 59th minute a long-range counter attack forced the team to recede deep into their own territory, resulting in a goal for Honduras. The team’s dream of a second medal in a row was dashed when a respectable shot at goal by Hwang Heechan toward the end of the match missed its target. That said, the fierce team manager Shin Taeyong did a commendable job of bringing the best out of what has been known as the country’s ‘weakest generation’. Korea REP. displayed the ability to grow profoundly, and much is to be expected for the players to succeed in the full national side after they tasted games on the world stage.
NEXTBACK